Exploring the relationship of the parts to the whole in photography.

These fragments I have shored against my ruins

Renaissance painters were probably the first artists to realise the importance of hands as a source of emotional power. As artists became more famous, employing a team of assistants to complete their many commissions, the master would always be responsible for the finishing touches, giving particular attention to the hands. Hands are extraordinarily expressive, indicating everything from a state of grace to inner torment. Poets, especially writers of sonnets, use synecdoche to describe their lovers in terms of isolated body parts. Some photographers have been particularly interested in photographing the hands.  Take a look at these examples. 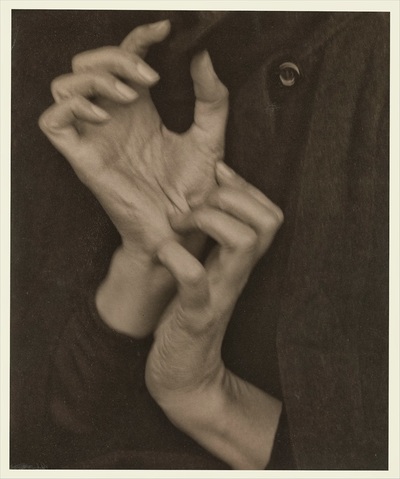 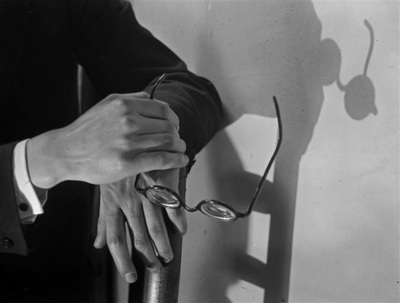 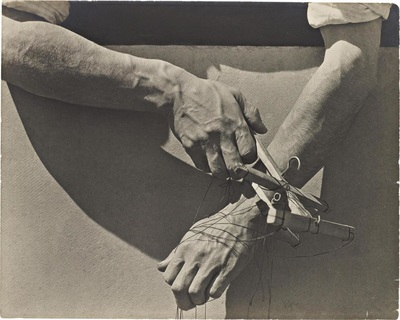 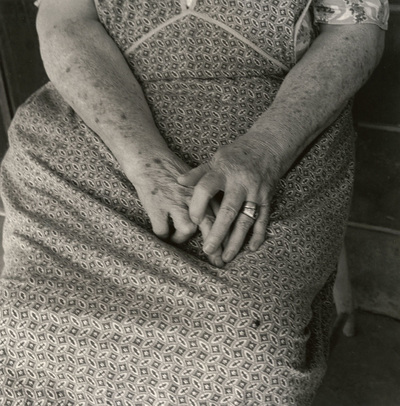 What do these pairs of hands represent? How have they been framed? Experiment with creating your own photographs of hands. Think about your proximity to the subject, the angle of the camera, the edge of the frame, the idea or emotion you wish to communicate.

Of course, it's not just people who might be represented by parts of a whole. I came across the word "synecdoche" again recently in Susan Sontag's 'On Photography' where the writer describes the problem faced by American photographers attempting to deal with the vastness of their country. Whereas Europeans, she argues, are at home in their countries (she cites August Sander's ability to categorise German society in his famous portrait sequence), Americans, by contrast, are overawed by theirs. They are foreigners in their own land. America is simply too big to categorise. Consequently, the only way they can begin to describe it is by using parts to represent the whole (i.e. using synecdoche):

Americans feel the reality of their country to be so stupendous, and mutable, that it would be the rankest presumption to approach it in a classifying, scientific way. One could get at it indirectly, by subterfuge - breaking it off into strange fragments that could somehow, by synecdoche, be taken for the whole.
​-- Susan Sontag

Robert Frank, in The Americans, uses a range of objects to represent the America he witnessed in the 1950s, jukeboxes being, perhaps, the best example: 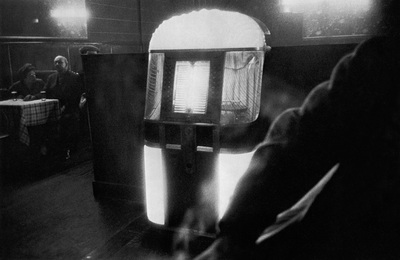 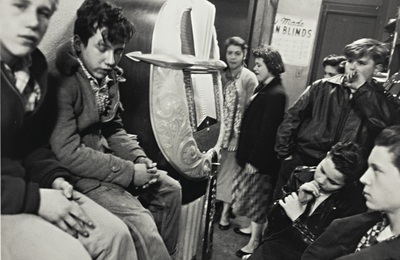 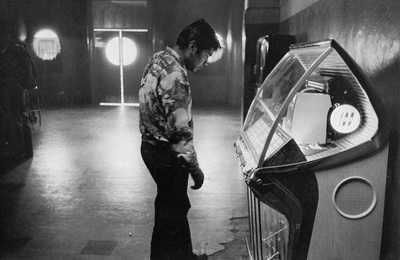 We might describe this approach as poetic. The jukebox is a synecdoche, a kind of metaphor, each one reminding us of previous jukeboxes and the web of accumulated emotions we associate with them. The jukebox is quintessentially American - shiny chrome and glass, artificial lights, Rock 'n' Roll, loud and brash. It's simultaneously a symbol of glamour and youthful rebellion. But it's also a sign for loneliness and thwarted dreams, providing a Blues soundtrack for drowning your sorrows. As Jack Kerouac writes in the introduction to 'The Americans':

That crazy feeling in America when the sun is hot on the streets and music comes out of the jukebox or from a nearby funeral [...] After seeing these pictures you end up finally not knowing any more whether a jukebox is sadder than a coffin [...] Anybody doesnt like these pitchers dont like potry, see [...] Robert Frank, Swiss, unobtrusive, nice, with that little camera that he raises and snaps with one hand he sucked a sad poem right out of America onto film...
-- Jack Kerouac, from the introduction to 'The Americans'

Another example of visual synecdoche can be found in the work of British photographer, Peter Fraser. His approach is reflected in Jean Cocteau's description of a poet:

The job of a poet, a job that cannot be taught, involves placing objects from the visible world, rendered invisible by the eraser of habit, in an untoward position that strikes the soul and imbues it with tragedy. One therefore needs to compromise reality, to catch it out, to flood it unexpectedly with light and to make it reveal what it is hiding.
-- Jean Cocteau

Here are some images from his series 'Lost for Words' from 2010: 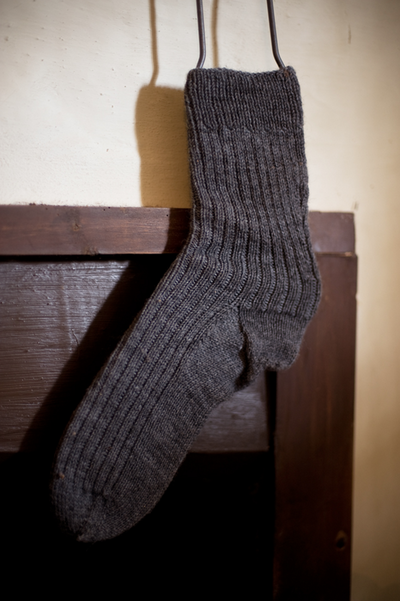 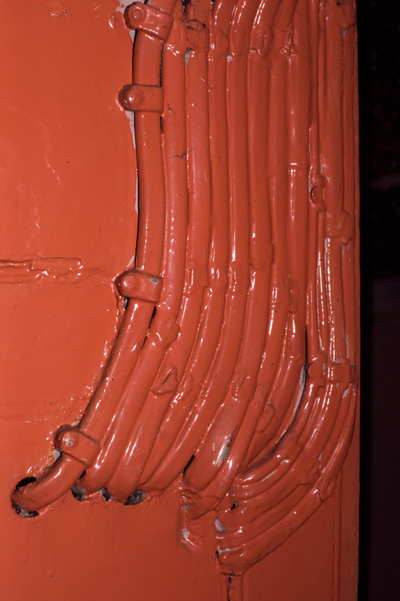 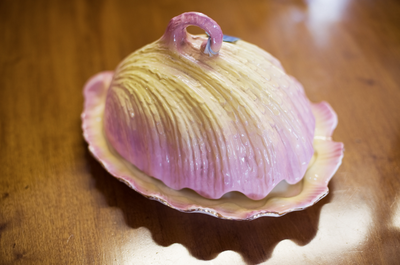 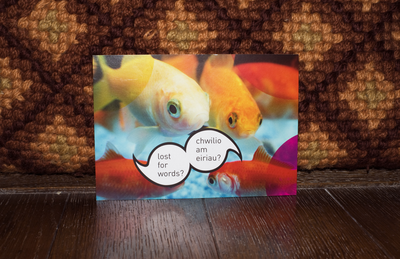 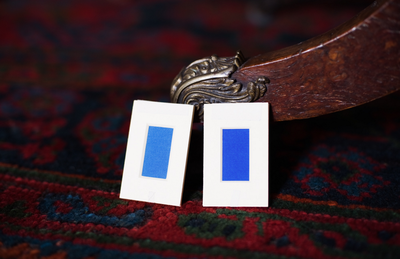 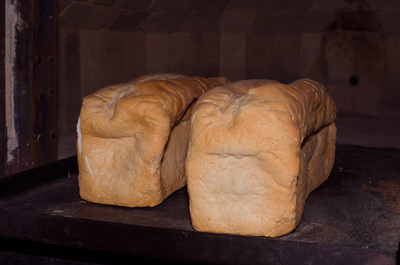 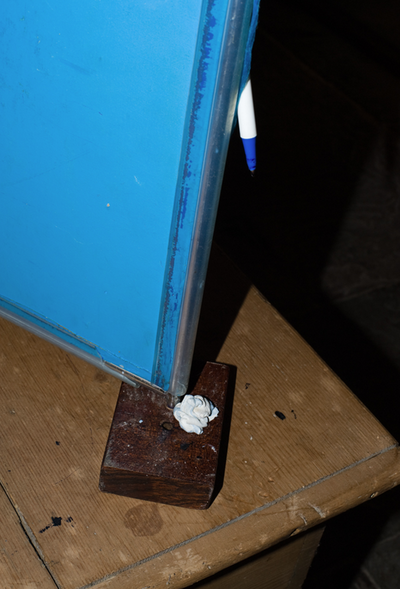 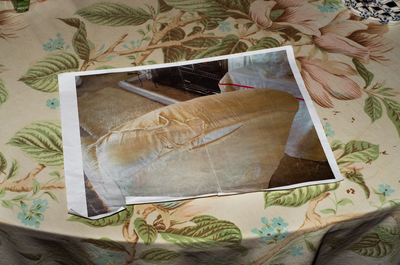 But how do we escape the "eraser of habit"? Fraser is interested in the way our subconscious mind can play a part in the process of selecting subjects suitable for photography. We may be drawn to something visually without fully understanding why. We may be "lost for words" but able to recognise the mysterious visual lure of an object or scene. Some detail, a patch of colour, an object out of place, an object from a dream, can mysteriously arrest our attention. As long as we are paying attention of course. Making a photograph, almost by instinct, is a way to mark and honour this moment of recognition. Later on, when we review, select and sequence our images, we can begin to wonder about what we saw and photographed, trying to make some sense of the ways in which these small parts make a more coherent whole. Fraser looks at the world at very close range. His eye is microcosmic.
So what about that other meaning of synecdoche, the macrocosmic rather than the microcosmic, whereby the whole is used to represent one of its parts? Might there be a photographic equivalent of that? Take these two famous images of crowds, for example: 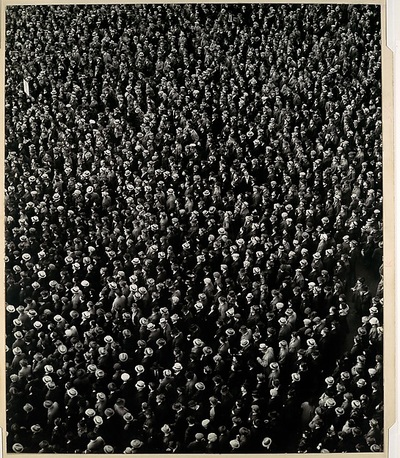 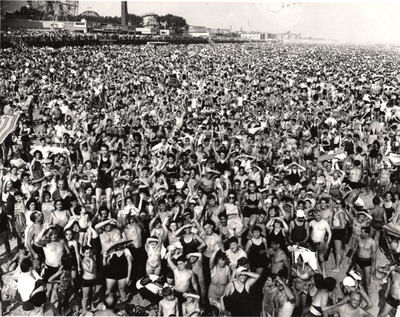 Compare these photographs with the massive, digital composites of Andreas Gursky: 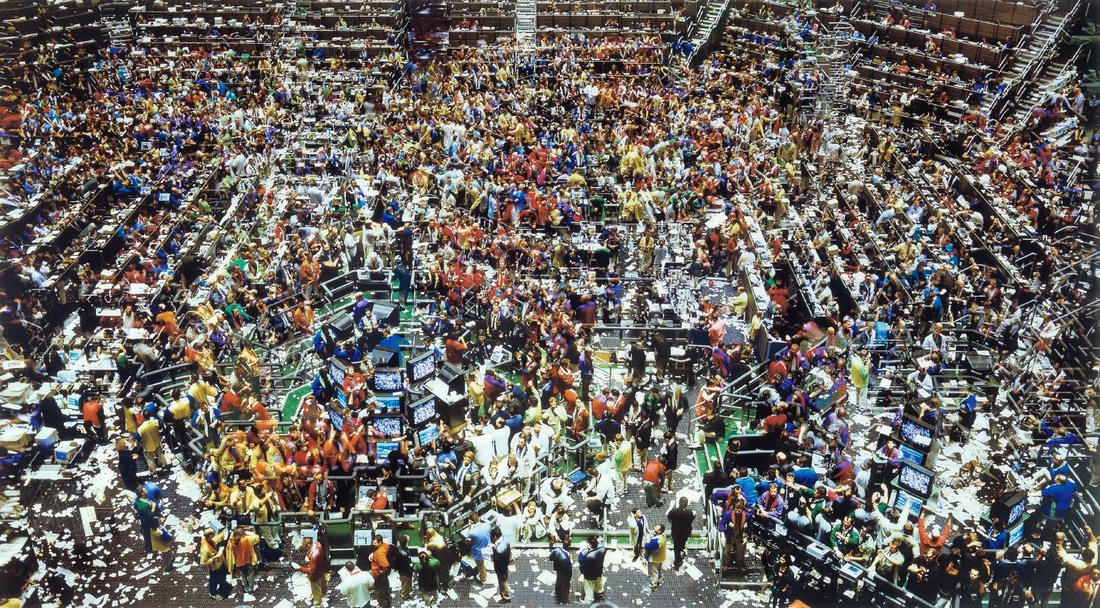 Andreas Gursky - Chicago, Board of Trade II, 1999
Sometimes, photographers take a step back in order to get the big picture. What happens when we attempt to gain a wider view of life? What's it like to look at photographs like those above? For me, it's a strange, slightly vertiginous experience. I'm seduced by the abstract beauty of the entire image - the patterns, the repetitive rhythm, the all-overness. But it's not long before I'm scouring the surface of the photograph for details, looking for anomalies, searching for the unusual amongst the typical, attempting to find an invisible Wally, something or someone I recognise, a visual foothold.

Take the striking crowd of workers, for example. What appears to be a faceless mass is made up of individuals with livelihoods, worries, political allegiances. The crowd at the beach, packed together like sardines, are really a diverse gaggle of New Yorkers, as different as chalk and cheese. When photographers capture the massive or monumental are they also attempting to say something very specific, depicting the whole in order to represent a little part? Every big picture is filled, after all, with tiny details.

Knowing that you don't know is the first and most essential step to knowing, you know?