Photographs tend to start with an idea. This idea might be cultivated over time - collaborated upon, arranged, constructed and so on - or it might arise in the fraction of a moment, an instinctive thought to grab a particular slice of time, to frame in a certain way, to record in a particular tone. Either way, once in existence, a photograph has the potential to take on new meaning. This is something we looked at in TC#7. Photographs rarely sit on the fence. Even the most mundane and innocent of images arrive with strings attached. Desired or not, these strings attach to the past, to previous conventions, to technical limitations; to personal experiences. There are endless strands. Photographs are forever being pulled, sometimes with considerable power. One way or another, photographs are rarely neutral.

The camera was a weapon for intimidating Germans into compliance with or indifference to the persecution and humiliation of their Jewish neighbours. One popular sign announced during the boycott of April 1933: "Jewish business! Whoever buys here will be photographed!"
​
Source: Sybil Milton

The following text is taken from THE CAMERA AS WEAPON: DOCUMENTARY PHOTOGRAPHY AND THE HOLOCAUST by Sybil Milton.

"The Nazis were aware that the camera could also be used as a weapon against them, and that images of the concentration camps would reveal the evils and horrors of political terror and racial fanaticism. After December 1944, Allied soldiers liberating France and Holland photographed identically worded French and Dutch signs posted near the Natzweiler-Struthof and Vught (Hertogenbosch) concentration camps: "Trespass of the camp grounds and taking photographs are absolutely prohibited. Violators will be shot without warning." 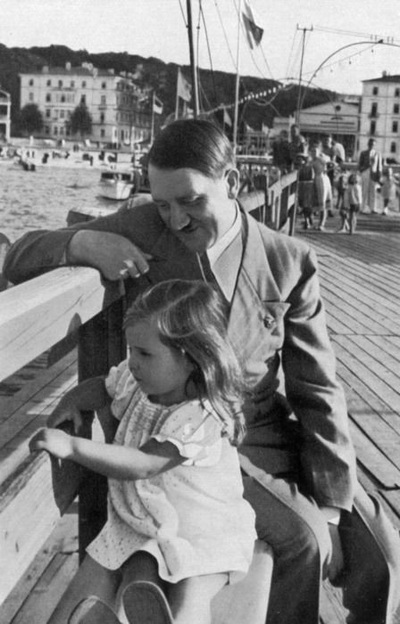 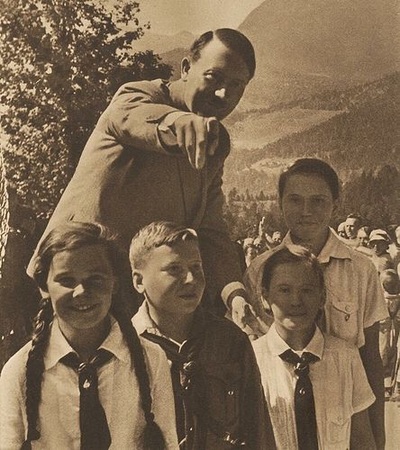 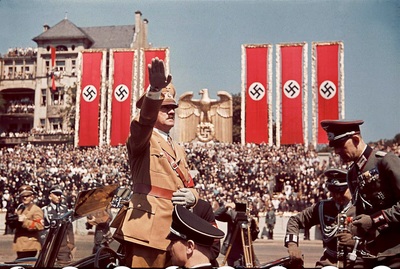 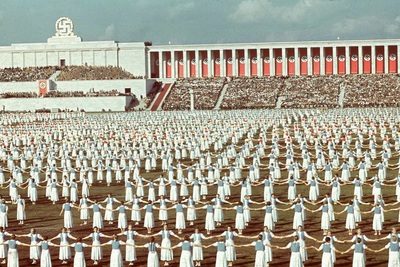 Consider the images above taken by Heinrich Hoffmann and Hugo Jaeger, two photographers who were allowed unrivaled access to Hitler.In TC#7 we explored how the context within which images are viewed can alter meanings. 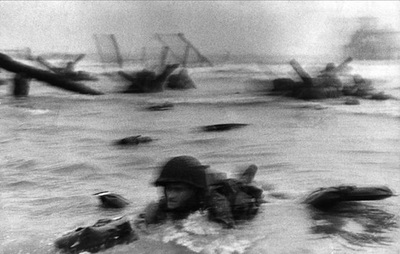 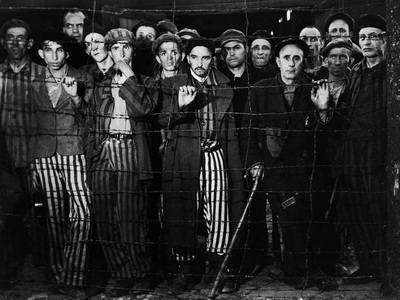 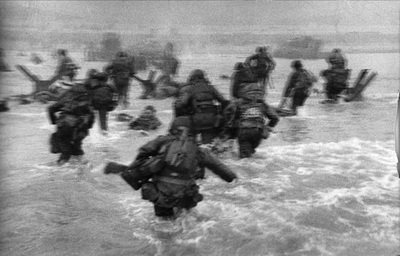 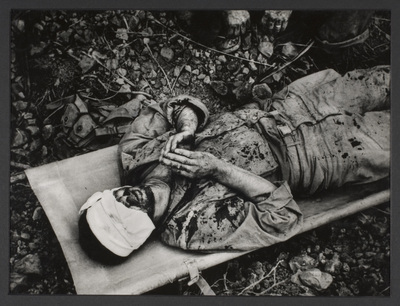 Eugene Smith, Wounded soldier praying, Okinawa , 1944–1945
In short, there could be a number of plausible explanations for these marks existing which have nothing to do with the process of gassing. The photograph needs close interpretation in its historical context. In order to accept the marks as the scratches of dying victims something more substantial than supposition is needed. The scratches in the photograph appear higher up the chamber wall. Testimonies tell us that often children were found higher up, presumably raised by adults (the children would not always have had a parent with them). Survivors might be able to corroborate the scratches as genuine marks from victims. I'm simply aware that I have not seen a definitive account."

In questioning the photograph above, the intention is not to cast doubt on the atrocities committed but rather to emphasise the ambiguity of photography and the potential for an abstract image to encourage us towards a conclusion in line with our expectations. As TC#9 reminds: Students of photography must be very careful to think hard about what they see in other people's photographs.
The following section shares two photographs that provoked various levels of outrage when first published.  In both cases those depicted came forward to give their side of the story,  accusing the photographer of misleading the public...

We were in a profound state of shock and disbelief, like everyone else we encountered that day. Thomas Hoepker did not ask permission to photograph us nor did he make any attempt to ascertain our state of mind. [...] Had Hoepker walked fifty feet over to introduce himself he would have discovered a bunch of New Yorkers in the middle of an animated discussion. A more honest conclusion might start by acknowledging just how easily a photograph can be manipulated, especially in the advancement of one's own biases or in the service of one's own career.
​
-- Walter Sipser (pictured far right)

The photographs above by Spencer Platt and Thomas Hoepker only provide us with a fragment of visual evidence from two particular moments in time. This 'evidence' has proven to not be fully reliable.

How would our understanding of the image change should we be able to hear a recording of the conversations taking place at this time?
Photography has the potential to promote both good and bad attitudes. The following section considers the power and unpredictability of photography when employed for advertising purposes...

Photography screws you up 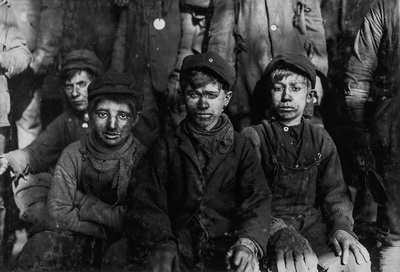 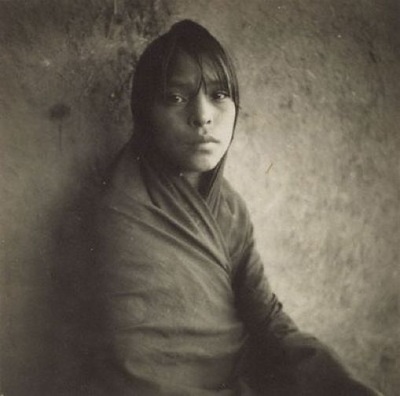 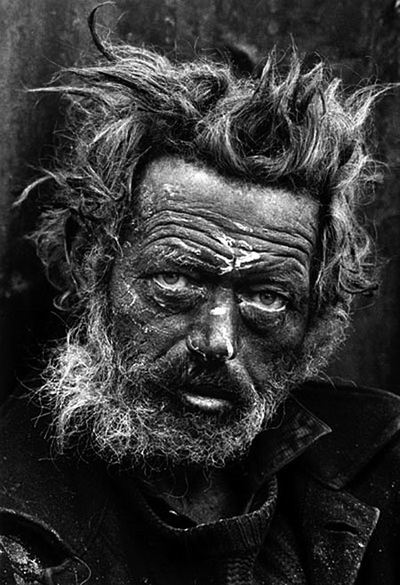 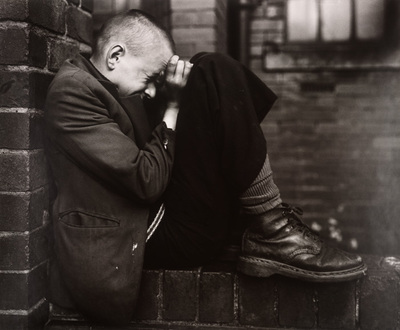 The portraits above might all be considered forms of 'social documentary'. The poor, social outcasts and lower classes have been reoccurring themes throughout the history of photography, a desire for political and social change often being the motivation for a photographer (or commissioning editor).

Guy Bourdin makes for a particularly fascinating study within the context of TC#9.  He is a photographer notorious for being volatile and controlling, whose models often appeared as victims in violent or compromising positions.  In his photographs he retains the power, objectifying the model; neglecting the product; breaking conventions.

Bourdin's pictures were the epitome of what the surrealists called 'convulsive beauty' (of which more can be read here). He refused to have his work shown in galleries or books insisting that it remained in the magazines for which it was commissioned, often published across double-page spreads. Within one criticised 1978 Vogue edition, the legs of a female model were printed either side of the page leaving the reader to open and close them. Always contentious, Bourdin established the idea that the product is secondary to the image, carefully constructing surreal and visually striking scenes that - depending on your viewpoint - have retained the capacity to shock, amuse, baffle or delight, often within the same moment.

Fear is something that we, despite ourselves, want to experience. And I think the violence does add glamour in a kind of perverse way. 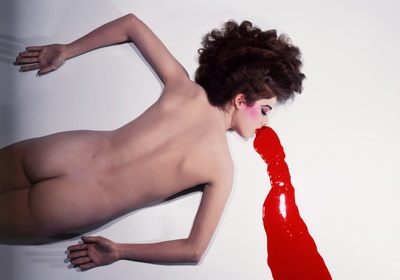 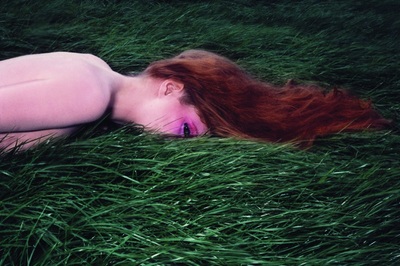 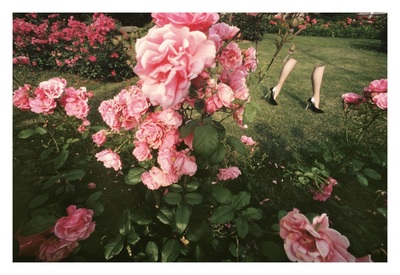 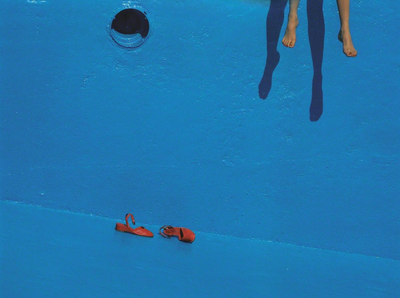 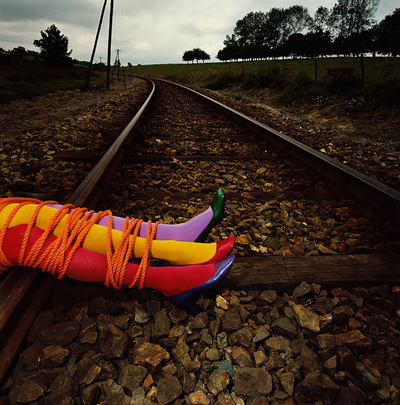 Bourdin realised that it is not fashion itself that seduces people but the fantasy it represents. Psychodrama and the theatre of the absurd pervade his work; a true master of the storyboard, Bourdin rigorously planned his compositions for fashion shoots to suit the format of the printed page.  Conceived long before the advent of digital retouching, he went to tremendous lengths to produce highly stylised images, often pushing his models to their limits to achieve his desired vision.
​
Source

Who holds the power? Consider the images above by Guy Bourdin within the context of TC#9: Photographs communicate powerful ideas about the world. They can be used to promote both good and bad attitudes. The following links elaborate on fashion-based projects in more depth and provide a range of resources alongside examples of student work:

In his book, Photography - a highly recommended read - Stephen Bull offers a chapter packed full of insights into the complexities of fashion photography and its continual quest to reinvent itself.

Fashion, by definition and in order to exist commercially, must always be 'new'; yet it is also constantly recycling, drawing on the past for ideas.
​
-- Stephen Bull

This amalgamation of influences is evident in the emergence of  'Heroin chic' in the 1990s, arguably fashion photography at its most abusive. Bull identifies the coming together of the rave (and drug) culture of the 1980s; the partial revival of punk subculture (in the form of 'grunge'); and an increasingly raw, snapshot style approach to documentary (evident in the work of Nan Goldin, for example).  High profile films such as Trainspotting and Pulp Fiction probably injected their own influences too. Whatever, Heroin chic's abject 'realism' and use of thin, likely-to-be anorexic models left a bad taste for many, one that still lingers around the fashion industry today. 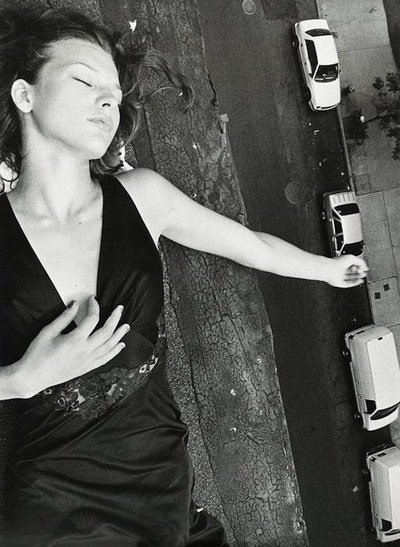 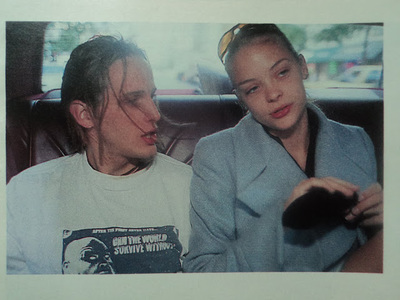 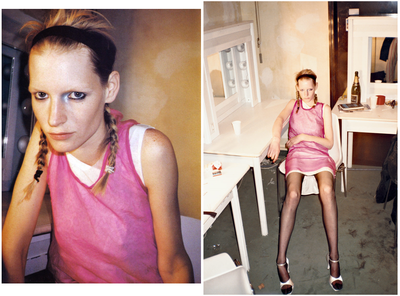 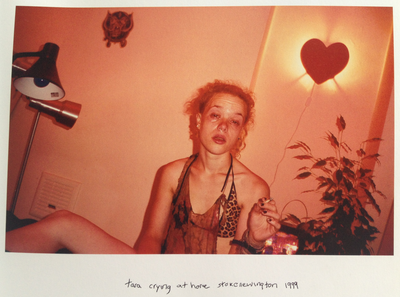 The grunge aesthetic of the early 1990s, with its use of the visual codes of snapshot and documentary photography, suggests that it shows real people and real-life situations. However, most commentators on this form of fashion photography are careful to place the word 'real' in quotes to warn that what we see is not reality, regardless of how the pictures appear.
​
-- Stephen Bull

Precisely because photography is such a powerful way to transmit messages, (imagine advertising without the photographic image) photographs can be used to challenge stereotypes and argue for social justice. They can be a kind of positive propaganda. The visual language of advertising, marketing and fashion, even of painting and film, can be used to subvert power relations and ask some difficult questions. The viewer is momentarily seduced by what seems to be visually familiar - bold colours, beautiful bodies, opulent surfaces - but is subsequently challenged by complex messages that seek to undermine lazy assumptions or conventional ways of thinking. For most of its history, art has presented women as passive objects to be looked at by male painters and viewers. Photography has largely maintained this tradition, with a few notable exceptions. But what happens when women become makers of meaning? Women photographers have chosen to use photography to directly challenge sexism, to question the assumed authority of the male gaze and establish other ways of seeing. 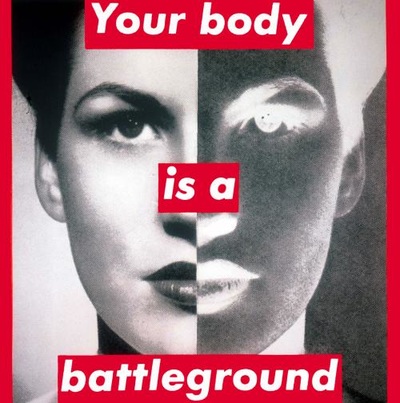 Barbara Kruger - Untitled (Your Body is a Battleground), 1989 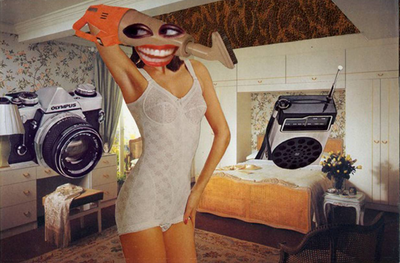 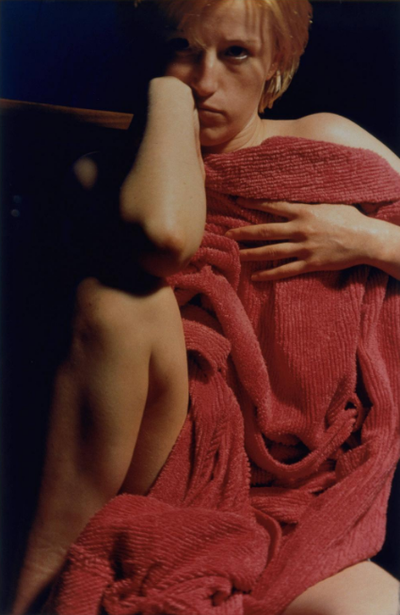 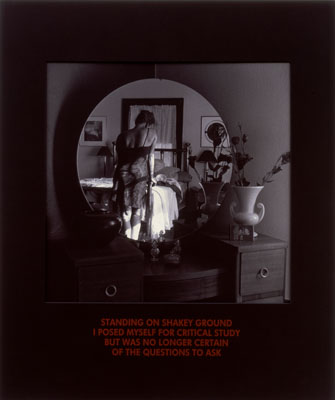 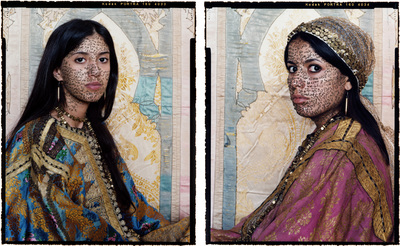 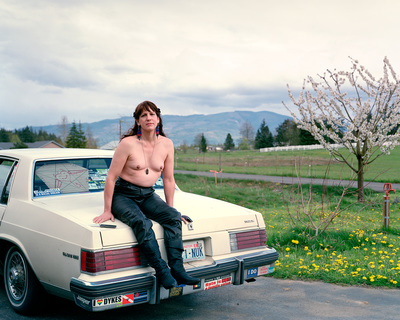 You may want to research the ways in which photography has been used by other groups in society to question the status quo, challenge assumptions and overcome prejudice and inequality.

The following texts offer further insights into some of the ideas that might have been scratched at the surface here:
By Chris Francis and Jon Nicholls