Jon Nicholls, Thomas Tallis School
Several of the Threshold Concepts for Photography seem relevant here. Photographs look like reality but are, in fact, abstractions. Their abstractness is a consequence of the visual language with which they are formed. Photographs are selections from the available evidence, partial views of the 'big picture' that have been carefully framed by the photographer. Given the relationship between evidence and power, the ways in which photographs have been used and abused by authority over the years, and the methods contemporary artists have deployed to undermine or question the evidential nature of photography, Threshold Concepts #9 also seems apt. However, as John Tagg noted in his book 'The Burden of Representation':

every photograph is the result of specific and, in every sense, significant distortions which render its relation to any prior reality deeply problematic [...] The indexical nature of the photograph - the causative link between the pre-photographic referent and the sign - is therefore highly complex, irreversible, and can guarantee nothing at the level of meaning.
​-- John Tagg

Consequently, Threshold Concept #7, which deals with the meanings of photographs and their varying contexts, is perhaps the most relevant here.

This project is designed to explore the idea of photographs as forms of evidence. Of course this is relevant to all photographs. To what extent can any photograph be relied upon to tell us the truth? It might be more fruitful to confine our exploration to those images which purport to be forms of evidence - a record of some thing, person or event beyond its aesthetic value. The project also asks some questions about originality, appropriation and authorship. These issues are central to contemporary artistic and photographic practice and students should be alert to them. Is the photographer always the one who presses the shutter?

Take a look at the photographs below:

We live in a era of "fake news". The recent presidential election in the United States has provided us with hundreds of examples. The speed and ease with which fake news stories can spread via social media is part of the reason. The fact that those who spread fake news stories can earn a fortune from advertising is part of the attraction. However, nothing convinces people of the apparent 'truth' of a story than seeing it in a photograph. Take the following example:

When we're faced with doctored images, even if up front if we know they’re fake, over time we may remember the image but not remember knowing that it's doctored.
-- Kimberly Wade

Doctoring images is one thing but fake news can still be made by misusing photographs as forms of evidence. Inventing captions, presenting unrelated images side by side and cropping are all ways of exploiting the believability of photographs. 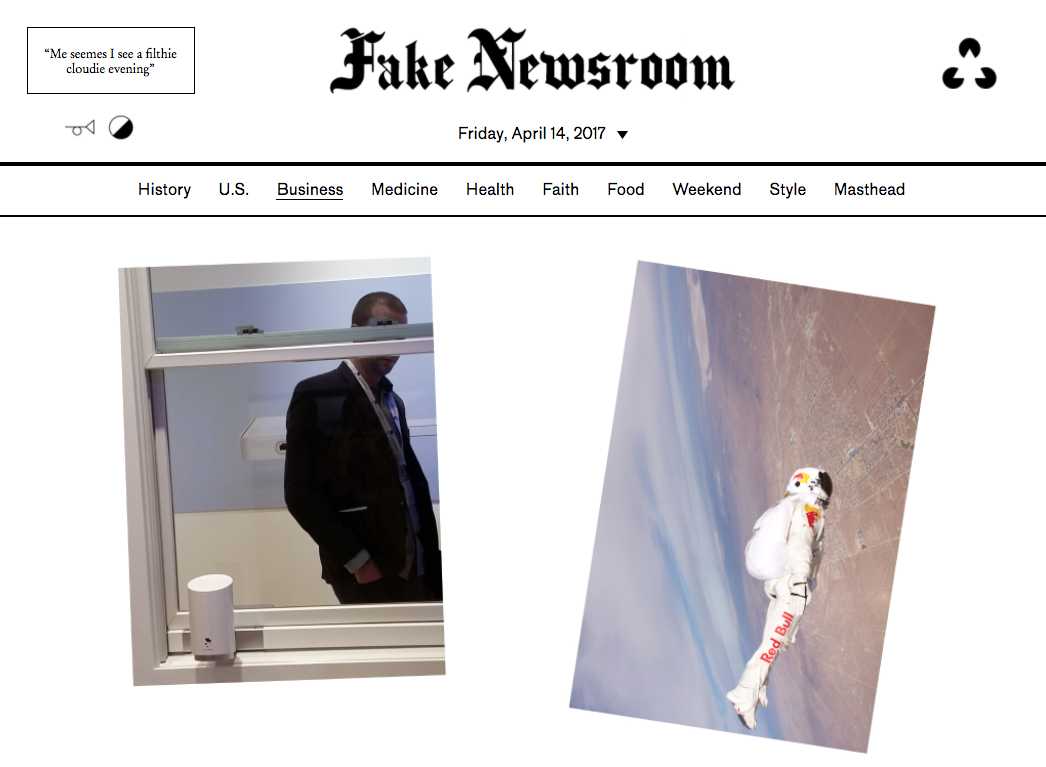 Set up your classroom as if it was a fake newspaper office. Gather news stories and accompanying photographs from a variety of sources. Discuss roles and responsibilities. How will you use the physical spaces in your classroom to make decisions about selection and layout of images? How will you use resources such as printers, scanners, photocopiers, computers, (even the darkroom), to produce your images? How will you decide which images accompany which stories? Will your newspaper include text and images or just images? Use the tools at your disposal to produce a fake newspaper.

​You could, for example:

She reminds us that photographs often require the addition of words to secure their meaning:

In 2016, the Michael Hoppen Gallery curated an exhibition of photographs entitled '? The image as question: an exhibition of evidential photography'.
The exhibition featured a wide range of photographs from fields such as medicine, conflict, engineering, astronomy and crime. Originally used as evidence of something, torn from their original context and hung on a gallery wall, the photographs could be appreciated for their aesthetic qualities and artistry.
A limited edition of 200 catalogues were produced to mark the show, again conferring on the photographs the status of art object:

Part of the fascination with all photography is that the medium is firmly grounded in the documentary tradition. It has been used as a record of crime scenes, zoological specimens, lunar and space exploration, phrenology, fashion and importantly, art and science. It has been used as ‘proof’ of simple things such as family holidays and equally of atrocities taking place on the global stage. Any contemporary artist using photography has to accept the evidential language embedded in the medium.
-- Michael Hoppen Gallery website

John Tagg, whose book 'The Burden of Representation' we referred to earlier, argued that the use of photography as a form of evidence in late nineteenth century culture was linked to the emergence of new institutions  and practices of observation and record-keeping that were part of relatively new institutions - the police, prisons, asylums, hospitals, departments of public health, schools and the modern factory. These techniques of surveillance and documentation have had a direct impact on society, creating new types of knowledge and methods of control. We might pause to consider the amount of surveillance, record-keeping and evidence-finding that tends to dominate our lives in school these days. ​Photography, argues Tagg, was complicit in the "spreading network of power". Photographs enabled those in power to objectify others, putting them in their place and studying them like specimens. Central to this process was the assumption that photographs told the truth. However, as we came to realise:

Like the state, the camera is never neutral.
-- John Tagg

Both of these artists are interested in the traces of human activity on the landscape - what we leave behind in the form of marks or scars but also how photographs can be evidence that something significant has happened but is no longer present. They are dealing with particularly violent episodes, using photography to make sense of the seemingly senseless. Both artists are aware of the limitations of photography, of the troubled and contested relationship between a document and a work of art.

In the 1970s artists began to really question the language and meanings of photographs. As photography was embraced by conceptual artists, new concerns emerged about the truthfulness of the photographic image. Several artist/photographers turned away from conventional documentary practice, troubled by ethical concerns. Staging photographs, often using actors, fabricating objects to be photographed and/or drawing attention to the inadequacy of photographic representations became ways out of this quandary. Much contemporary photographic practice is similarly concerned with issues of truthfulness. Here are some artist/photographers for whom photographs provide a way to test the 'evidence' before our eyes:
Lucas Blalock is another artist who uses photography to ask questions about what we see. In this video he describes his process and some of the tools in Photoshop that he frequently uses (or misuses), drawing attention to the work usually done 'offstage':