Post 16 lesson plan:
Questioning the relationship between photographs and reality.

By Jon Nicholls, Thomas Tallis School
This resource is about artists who have questioned the documentary tradition of photography. Please also therefore take a look at The Documentary Challenge project by Chris Francis which offers some suggestions about getting to grips with what it means to make documentary photographic images.
This resource refers to the work of several photographers whose work is concerned with the construction of a fictional photographic reality. I'm not referring here to obviously synthetic images - photo collages, for example - which are clearly constructed. I'm interested in pictures that look superficially like the world in which we live. And yet they question the truthfulness of that world, undermining the seemingly direct link between fact and the photograph. This is a personal selection and by no means exhaustive. I have tried to offer some suggestions for related activities that might help students explore this complex issue for themselves.

Art photography… will no longer draw much of its strength and context from a perception that it is inherently a comment on visible, verifiable realities, but will be come more easily to be seen, like painting, as synthetic, the outcome of an act from the artist’s imagination.
-- Fred Ritchin

Wall's training as an art historian has clearly influenced his approach to photography, not only the references to famous paintings but also the level of control he exercises in designing the compositions of his images. Sol leWitt's Paragraphs on Conceptual Art from 1967 was also a major influence, convincing him that the idea behind the image was as significant as its material reality. Wall creates large illuminated light boxes that appear almost like advertising display screens. They are seductive, drawing the viewer into fictional dramas that the artist has painstakingly created from memory. Wall refers to his works as "cinematographic" and "near-documentary". His practice has had a huge impact on the direction of art photography. 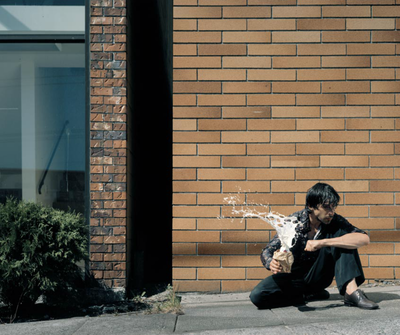 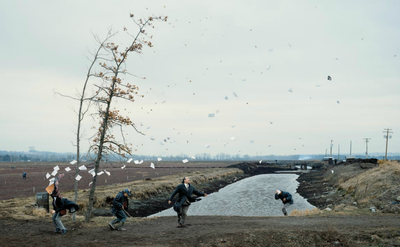 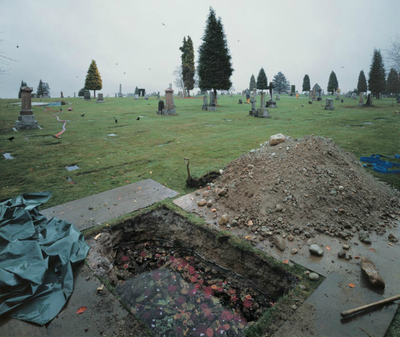 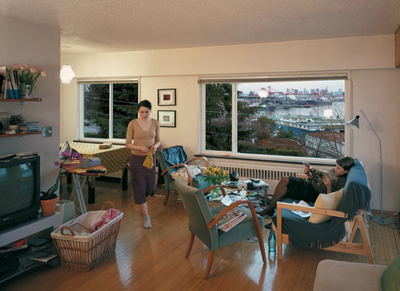 A view from an apartment, 2004-5
Take a close look at these other examples of Jeff Wall's pictures. Click each thumbnail image to see a larger version. Do they remind you of other images you have seen before? How believable do you find each scene? Which genres of art and/or photography do they reference? What do you find surprising or unusual? What questions might you want to ask the photographer? What might be the differences between seeing them small on a computer screen and seeing them printed much larger and backlit on a gallery wall? What photographic features, ideas or issues might each image address?

Jeff Wall belongs to a generation of artists and photographers responding to Conceptual Art. He was also interested in the ethics of photography and his decision to stage his photographs using actors is perhaps connected to this interest. You can find out more about this ethical dilemma in this resource.

From 1977 to 1980, Cindy Sherman created a series of 70 pictures which came to be called 'Untitled Film Stills'. Sherman has gone on to establish a very successful career as a photographic artist in which she uses herself as a model, often transforming her body and features so radically that it's almost impossible to recognise her. Sherman's early work contains the seeds of what was to develop later - a fascination with photographic fictions, the disguised self-portrait and references to other mediums and genres. Like Jeff Wall, Sherman questions the relationship between photographs and facts. Her pictures play with image conventions and the viewer's expectations.

We’re all products of what we want to project to the world. Even people who don’t spend any time, or think they don’t, on preparing themselves for the world out there – I think that ultimately they have for their whole lives groomed themselves to be a certain way, to present a face to the world.
​-- Cindy Sherman

Here are some more examples from the series. What do they all have in common? What differences do you notice? Imagine the titles of the (non-existent) films for which these might be the stills. What roles are given to women in these films? What strategies has Sherman used to disguise herself? How convincing are the pictures? 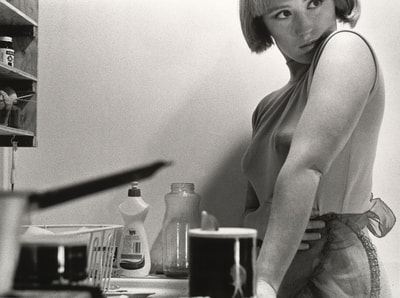 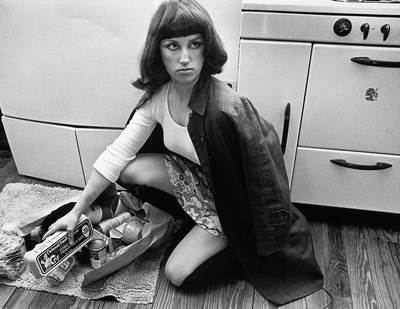 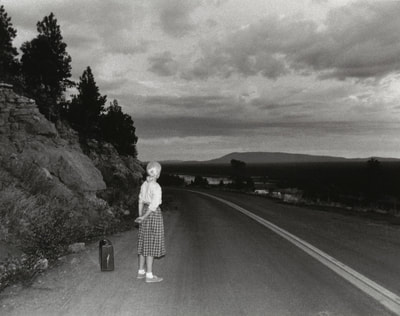 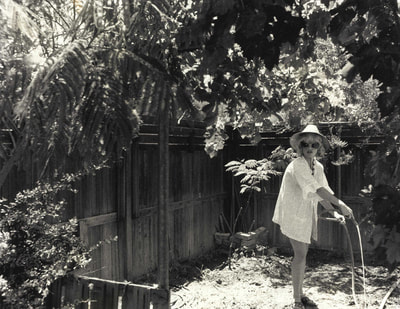 Moshammer is a young Viennese photographer whose practice is concerned with responding to particular places and the people who live there. In 2015. The artist was working in Las Vegas where she received a love letter from a man named Troy. The resulting series entitled 'I Can Be Her' (and a spin off exhibition entitled 'Not just your face honey') explores the relationship between reality and invention, in life as well as photography.

The work revolves around this letter and a person who exists but also doesn't [...] The series was an attempt to thematise aspects of love, illusion, and the discovery of identity. In his letter, Troy fantasised a version of me into existence, and I turned that upside-down and invented a version of him. Despite that, much is left open to the viewers.
-- Stefanie Moshammer

In the exhibition version of the project Moshammer mixes still photographs, extracts of text, screen shots from Google Earth and videos in a multi-layered installation. The letter received by the artist appears to be real but the language used in it is ridiculous. Las Vegas is a similarly unbelievable place, a city rising out of the desert, almost like a mirage. And yet it is real. Moshammer's response to the letter is to use photography as a way of rationalising the non-existent relationship suggested by it. Troy promises to buy her a "cute, special fast car thats almost new". He offers to be her ticket to American citizenship, put her up in his house (where he lives alone) as an upcoming new celebrity. "You look like you ARE somebody", he writes. "I'm an inventor and upcoming first REAL Life Super Hero! I know a bit hard to believe but Believe it!" Moshammer's pictures play with doubles - motel room doors, lamps, stones, tire tracks etc. She photographs exotic plants with tangled leaves. The few people who appear in the photographs are heavily disguised, either by their clothes, cropping or through digital manipulation. One of the pictures shows a sign with the warning IT WILL END IN TEARS. As to whether these images are staged or documentary, Moshammer comments:

It's a mix. Document, yes - when you take pictures of a place or people, you're documenting something, of course, but purely from a personal perspective. And staging too - because pictures often don't exactly reflect the reality on the ground, but are instead created by me in some shape and form. It's difficult to find a category. many levels play a role in my work. 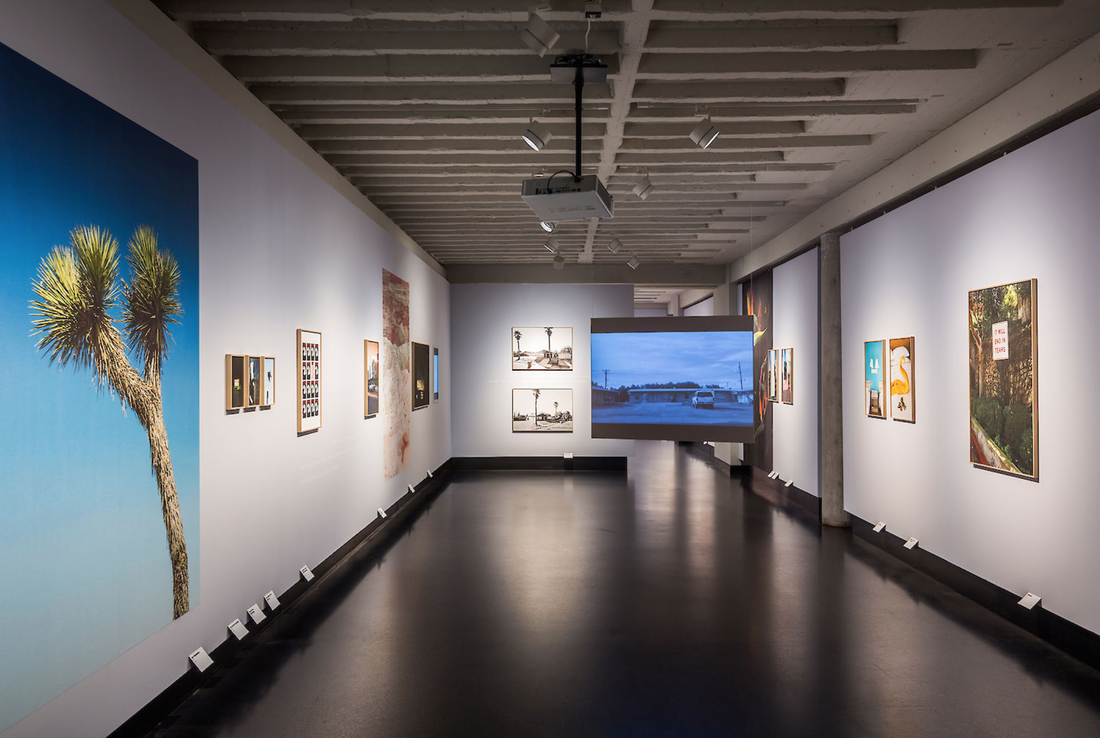 Ashcom's work explores the relationship between fact and fiction in photography through the invention of a place called Hoys Fork, much like the novelists William Faulkner and Thomas Hardy who set their stories in the fictional landscapes of Yoknapatawpha and Wessex Counties. in his most recent collection entitled 'What the Living Carry', Ashcom brings together photographs, type-written letters and a hand-drawn map to build a fictional narrative of a foreboding place. He leads us on a trail through the town and its surrounding forest where we meet unidentified strangers engaged in mysterious activities. A series of four hand-typed letters written by ‘Morgan,’ request a DNA analysis from a certain ‘Eugene’ at the Center of Epigenetics and Wellness of the Spirit.
The work has been published as a photobook and appears in an exhibition that features objects, furniture and drawings alongside the framed images. 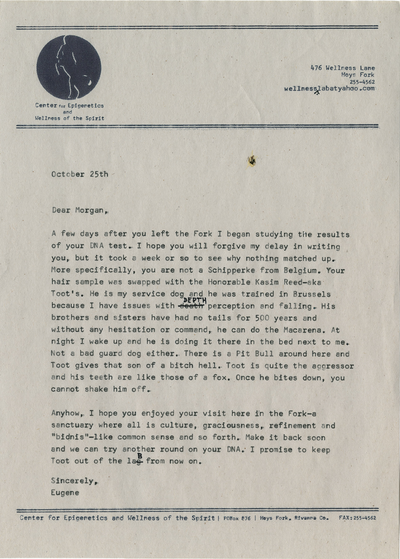 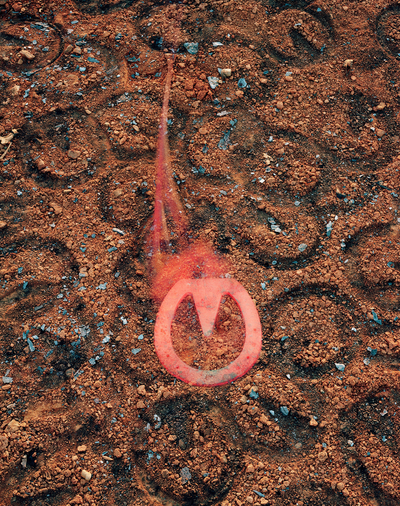 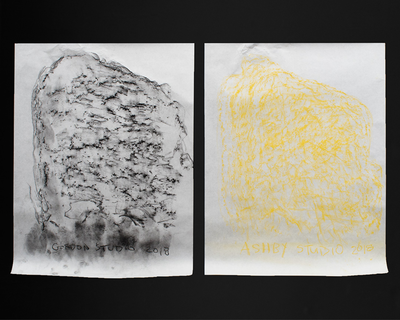 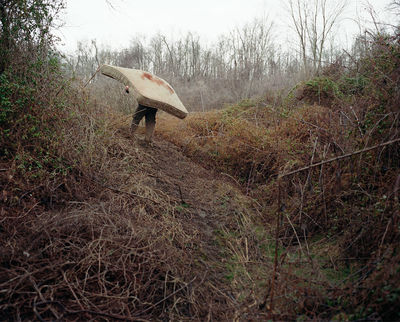 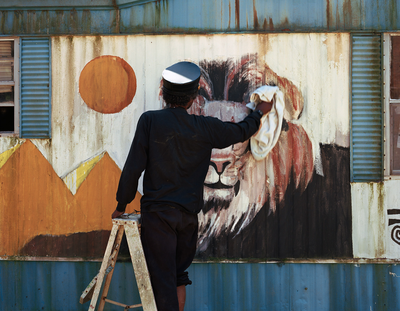 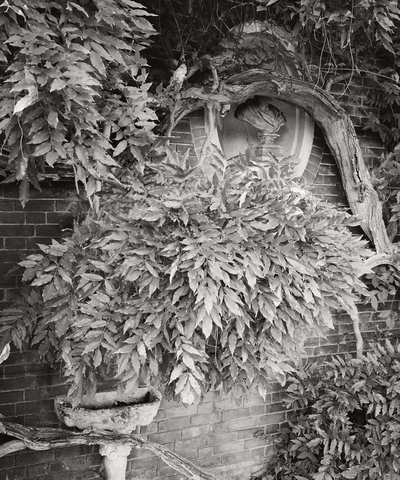 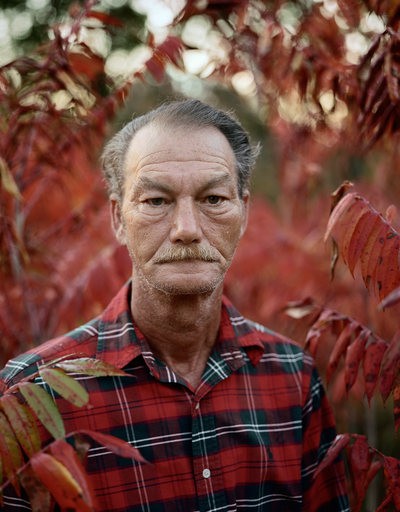 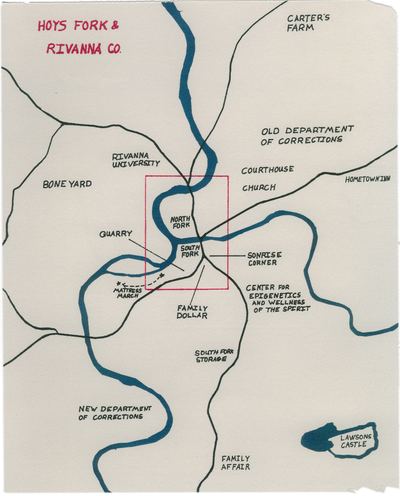 I almost think that I have learned more about the world through literature than I have by living in it. What the Living Carry is really borrowing its shape and its form from literature. This idea of a narrative read is embedded in us, and it is, I think, the place where the experience of the work are most purely felt. To me, the book is the primary idea, the end state — and it is because of that connection I have to literature.
​-- Morgan Ashcom